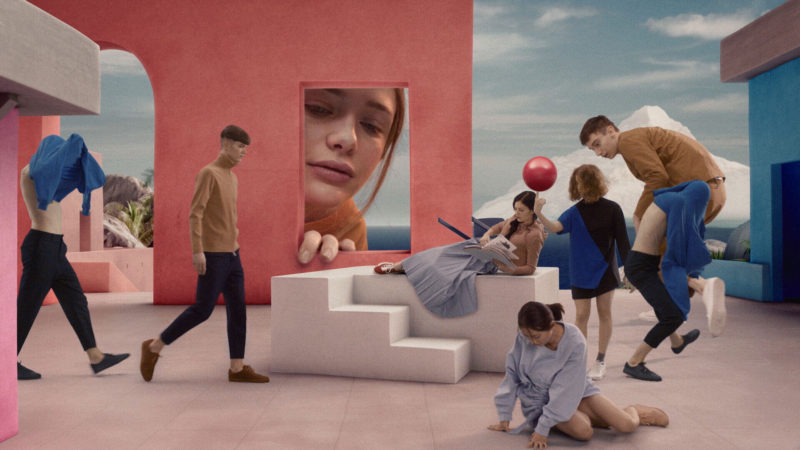 Come and discover their use of a strategy of diverting everyday objects and situations to introduce dazzling colors, unusual staging in order to design a pop and playful world coupled with a Lo-Fi aesthetic.

The term lo-fi (short for low-fidelity) comes from the musical field and refers to inexpensive recording methods to achieve dirtier, compressed, or grainy sound. Appeared in the 1980s, this term connotes only the sound universe since it also designates a visual identity characterized by memes, strange video montages, video games and animes. Visually, lo-fi treats nostalgia and melancholy with humor through inexpensive means that will make it look DIY **.

These creators seek to surprise with original associations creating a destabilizing and funny visual. Vallée Duhamel’s collaboration takes place in a very organic way and the complementary practices of the two artists make it possible to deepen the subjects treated in a concern to respect the visual universe of Eve and the conceptual and narrative development of Julien.

“We both shared the same passion: manifesting creative visions into material objects and spaces.”

“We both share a common passion: manifesting a creative vision and materializing it in objects and spaces”

This unique way of working is probably the key to their success since the duo has been the recipient of several distinctions since their inception, including: the Grafika Competition, Infopresse, Award-winning project, Graphic animation category (2016 and 2017) for the A very short film projects; Samsung – One pen, infinite possibilities and Google Android Wearable. “Les inconnus” (2017), a short film, won the Vimeo Staff Pick, it was also a finalist of the 37th edition of the Black Maria Festival, it received the first prize of VOTD, it was the official selection of the Atlanta Film Festival as well as the Cinequest Film and VR Festival. The project won the Audience Choice at South by Southwest, was an official selection at the Nashville Film Festival, and ultimately received an Honorable Mention at the USA Film Festival in 2018. Their work was presented at the Contemporary Art Center in Cincinnati with their installation “Smash Pong” (2013) and their video and interactive installation “Danse Dance” (2010) was presented at the Clark Center in Montreal as well as at “It’s Nice That” in England.

Vallée Duhamel uses elements relating to the game in their exhibition, including kinetic sculptures (an inanimate work, yet in motion thanks to different stratagems, whether mechanical or not). According to Julien Verhaeghe, researcher and doctor in aesthetics, the use of playability in art is one of the most contemporary devices and results, but above all testifies, to the evolution of technology in our lives (inking by the even does these practices in a current logic). By technologies we mean the evolution of video games and mass communications which have allowed the emergence of interactive devices that place the user at the center and in control of his virtual universe. In other words, we are used to interacting with our environment and our hobbies are more and more technical. The diversion of object and situation with which Vallée Duhamel has fun is indicative of the relationship we have with this environment, its materiality and the use of objects and materials that are available. Proposing autonomous forms that interact with each other in a frozen time creates tension for the viewer who is caught up in the movement and wonders about a potential break in the mechanics of the works proposed by the artists. The game takes place in this letting go of the imagination that combats the monotony of everyday life and the predetermined function of what surrounds us.

Verhaeghe, Julien. (2015). The playability of art as a device of the contemporary. Digital Interface, volume 4 (1) DOI https://www.unilim.fr/interfaces-numeriques/831

Bastien, Hugo. (2018, May). The HIP-HOP LO-FI: the sub genre that has become a real culture. Urbania https://urbania.ca/article/le-hip-hop-lo-fi-le-sous-genre-qui-est-devenu-une-veritable-culture

How can you make art attractive to your children? Photos of the exhibition Vallée Duhamel
IG FB