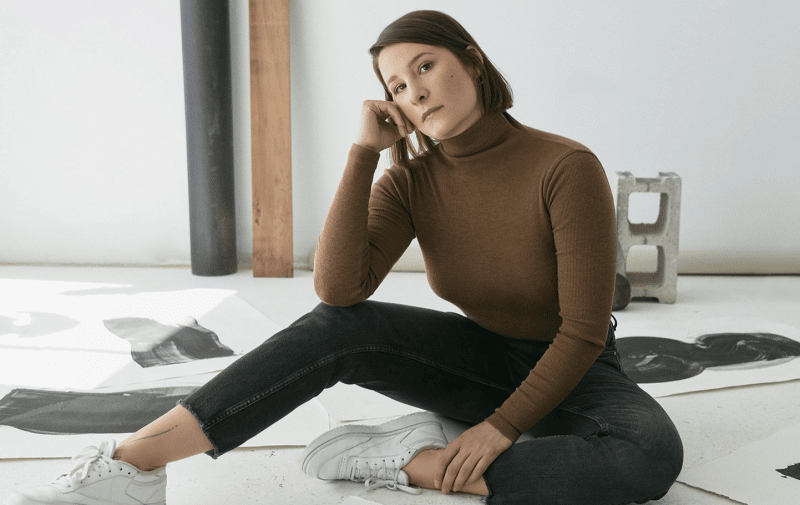 Transdisciplinary artist, Hamie Robitaille, worked as a graphic designer in advertising agencies as well of having her own personal practice at the same time. Today, this artistic practice has become more serious, which led her to do her first solo exhibition last October.

What brought you to create your own work?

It was the desire to do something for me, which is not governed by a client with specific requests. I wanted to explore different techniques and do something that I enjoy. This is what’s difficult in graphic design, because we are in a hurry to produce, we have to deliver on time. With my artistic production, I want to free myself from this pressure.

According to you, what do you think is the difference between design and art? Do you make a connection between them?

When I was at university, I wanted to abolish the difference between these two practices. On reflection, I think that in graphic design you answer a question, while in art you ask a question. The difference is marked in the process, in art we want the viewer to ask questions while looking at the work, while in design we want him to understand the image. My practice is located precisely between the two disciplines, I consider myself a transdisciplinary artist.

What are your techniques? And under what circumstances did you develop them?

I first took serigraphy courses at Cégep. Then, I fell in love with printed art when I went to see an exhibition on prints at the BAnQ, where I discovered the techniques of aquatint, wood engraving and copper engraving. I was also able to experiment with Letterpress during a typographic printing course at the small printing museum and I took courses at the Circular Workshop in copper engraving.

What is the theme of your work Hexachrome?

I like to work on abstraction to its limit of distinction, I call it “abstract-concrete”. I try to develop a formal vocabulary that evokes a feeling or an emotion. Hexachrome started from a game in which the symbolism is strong: the tarot. I made different symbols and I wanted to bring them to a level of abstraction in which we understand them, but not quite. Gradually, we no longer distinguish tarot symbols, it rather evokes such and such a thing to the spectators. And that’s what interests me, this abstract side that remains concrete by evoking real things.

Also, people inspire me a lot. The situations, the unhealthy daily life with the performance, the pressure and the burnout that it brings.

What other themes do you like to address in your work?

Movement is part of my practice, the gesture in the matrix, especially in wood engraving, it is the movement that works the material. We also find this movement in copper engraving. Besides, I worked monotypes on copper in a series called Hot Sauce, but with a squeegee like in screen printing, it allowed me to work on the movement of the squeegee in the ink. I liked this technique so much that I would like to make another series in large format, the movements that I will have to perform on this type of format would train my whole body as if for a choreography.

Then, right now I’m working on a big digital art project. With my collective I put on a show called Beats, in which I dance. Finally, this search for movement leads me to work on extremely different projects.

Also, people inspire me a lot. The situations, the unhealthy daily life with the performance, the pressure and the burnout that it brings. I question the Montreal way of life, alcohol to try to forget. In particular, in Dérives Nocturnes, it was often when I was walking in the street that ideas for poems came to me.

Can you tell me a bit more about Dérives Nocturnes?

It’s a poetry book that I self-published, because I wanted to have complete control over the subject matter, the words, the illustrations and the photographs, I did all the design. I worked in bars for a long time, so it was kind of an ode to Montreal nightlife. From my observations of this nocturnal fauna I wrote many poems, I made a selection and I liked to put them together in a certain order so that they tell a story. A story that is not mine, but that of a nocturnal Montreal as fun as it is depressive. I was particularly inspired by the book Désâmé by the poet Patrice Desbiens.

What do you think is the recipe for an image that works?

An image you like. I work a lot on quantity and it is in the selection that I will find the strength of an image. Then, I like working in the series, because I find that the groups of images have a stronger impact than a single image. Finally, in printed art there is obviously the technique that counts, it is complex to arrive at an image that is well done, well printed, with quality.

However, I work a lot through failure.

In art there is a lot of the unexpected and you have no choice but to accept that certain things do not work as planned. It takes me into uncharted territory, my practice is made more real. Mistakes lead to the greatest discoveries.

What are your future projects?

I am currently working on another book in the same style as Dérives Nocturne, but more focused on work pressure and burnout. As mentioned earlier, I would like to do a large format of the Hot Sauce series. I would really like to develop the monumental aspect in my work, to go towards the large format, perhaps by working in the public space. The performance also attracts me a lot.

8 Educational Things To Do With Your Kids In Montreal