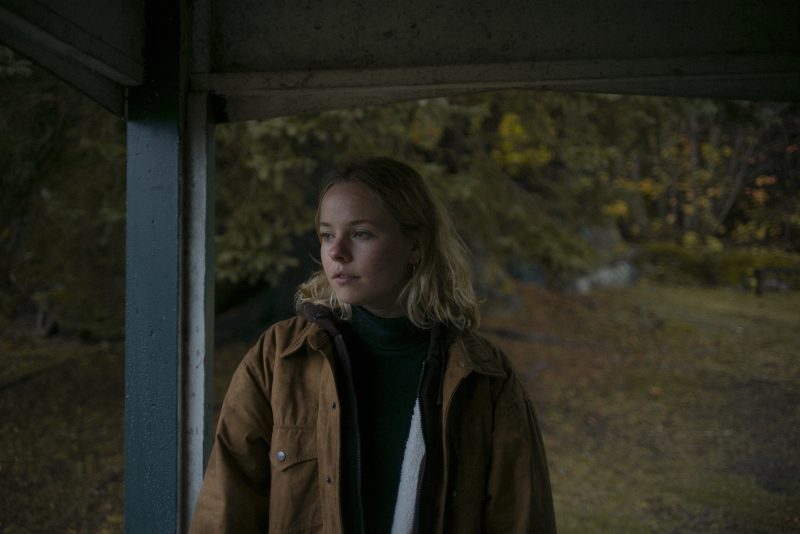 First of all, some very general questions. What is your relationship to art?

I like all kinds of art, but photography is what I am personally attracted to and understand the most. For me, it is a universe of multiple possibilities: it can be very revealing as well as letting you imagine many things.

How long have you been practicing photography?

I have always been in contact with photography: my father had a darkroom at home because he practiced himself, but it is when I was eighteen that I started. I went to South America with a camera, I took some pictures, I liked it, and it’s when I went to live in Australia that I really started.

I tried a lot of different things, I did portraits, fashion photography, and I realized that I liked to do staging and to bring humans into nature. My taste has developed over the years and today I am in my third year of photography at Concordia.

What were the factors that pushed you towards this practice, your sources of inspiration?

Honestly, it started with me. I think it was the connection with people that drew me in. I really enjoy hearing stories, meeting new people, and I think the camera is a really good excuse to do that. There’s also the artistic dimension, creating scenes, moments, using clothes and props to showcase the model in some way. I actually think it’s a combination of both, that photography was a beautiful discovery that brought together creativity and love of the human.

Do you have a role model, an artist or photographer who has marked your art or whom you particularly admire? Someone you are specifically interested in today?

Since I do analog photography, I’m generally very interested in large format photographers, because that’s who I identify with, but I also admire the use of light and the storytelling of certain artists. Justine Kurland for her stagings, Michal Chelbin for his portraits, Alec Soth and Bryan Schutmaat for their documentary photography.

You seem to be preoccupied with the notion of space, of the position that humans occupy in the world, of the relationship between the individual and his environment. How do you position yourself in the world and the space that surrounds you? What is your relationship to the environment, to your surroundings?

I think there is always in my photos the concept of space, of size. You never really know where you are. I started to explore that two years ago, when I came back from Australia, when I noticed that where I was had a real impact on how I felt, where I wanted to be and how I wanted to live.

I have access to a house in the Bas-Saint-Laurent, a much greener place. There’s a real horizon, more space, more expanse, and that’s where I shoot a lot. I have the impression that being in this place leads to a different way of life, that it opens up opportunities that are really different from those offered by Montreal.

So when I talk about the relationship between humans and their environment, I mean living the way you want to live. It’s probably also a projection of how I personally feel outside the city, in the great outdoors.

With&nbsp;For now, we cradle in tall grass, what relationship between human and nature did you try to show?

It’s a project I started when I was doing an artistic residency at the Caravansérail Rimouski art center, during which I wandered around the Bas-Saint-Laurent and in Gaspésie, which I’m still working on, and which I want to develop in the following months. It’s a bit complicated for me to talk about a project that I haven’t finished, because it takes time to understand it, but I think I wanted to put forward all the possibilities, the different ways of living outside the city. The regions of Quebec have so much to offer, I am discovering them myself. By showing the young generations who are joining these lifestyles, I also show what I am looking for.

The urban exodus is mentioned as a phenomenon that interests you. Have you experienced it yourself or are you currently experiencing it?

Yes, it’s something I’m experiencing right now, and I’ve been thinking about it for a while. When I was in Australia, I lived next to the sea. There was this closeness between the city and the countryside, and when I came back to Montreal after those four years, there was only the city. So I had this desire to reconnect with nature: I left Montreal to come and live here, in the Bas-Saint-Laurent, for six months. I know why I did it, what I was looking for, but I wanted to meet other people who had experienced it, to question them and to put forward through images this general feeling that pushes us to get away from the city.

On the page dedicated to you on the Caravansérail website, we read that this series is also a social research, on the theme of the house, of belonging. What social significance would you give to this change of place?

I think that it is a quest that is personal to each person. On the theme of home, one can be “at home” and feel that this is not where one wants to be, no matter how luxurious the “main residence” is. It’s a search: for me, who grew up in Montreal and is beginning to realize that something else exists, I wonder a lot about what home is: a place, people, a place where you would like to be but don’t necessarily know… Home can mean so many different things to different people.

I still have the impression that if we leave, it’s because we expect something more personal than what the city gives us. It can be freedom, a simpler way of life, a proximity with nature, or something else. For me, it’s the search for what’s really important in my life, and here, in the Bas-Saint-Laurent, I feel like I’m finding answers, or at least I’m heading in the right direction.

What camera do you currently use? What is your favorite working tool and why?

I do analog photography: I use medium and large format film cameras. I enjoy working with them because I like the physical aspect, the materiality of the film, but also because the process forces me, as a hyperactive person, to take my time. I also like the intimacy that film photography creates, both between me and the camera and with the people I photograph.

In some photos, it looks like the surface has been scratched. Do you do a lot of editing?

Everything is manual. I developed all my black and white work, everything you can see is done by hand. For my color work, I have it developed because I can’t do it myself, but I really like the human aspect of analog photography, the touch. I don’t edit my photos much, I don’t have enough patience for that!

I saw that you sometimes use blur. What do you like about this effect?

I used it a lot during the pandemic, as a reflection of how I was feeling at that time. My productions were darker, more solitary.

How did you come up with the idea for the Off grid series?

Originally it wasn’t really a series, more like single images that I had the idea for from time to time; but it came intuitively, depending on how I felt at that moment. That’s why there are also some self-portraits in Off grid.

Let’s go back to the title. What does it mean?

It seemed to me that the look was important in many of your photographs. Is this a subject that you have specifically focused on?

Yes. Actually, except in some of the portraits, I like it when the models don’t necessarily look at the camera, I feel like you can identify with them more. It gives more room to the viewer, to his interpretation.

Your photographs seem globally very staged, we have little impression of spontaneity, but more of a moment that stretches in time, like a timelessness, a melancholy. Is the relationship to time and especially to the past a theme that stimulates you?

I like this idea of timelessness. At the time when I was doing a lot of portraiture, I made numerous references to the past in my work, because I had experienced difficult things. Everyone is influenced by their life path, carried by their experiences, and I think there is a melancholic dimension in my portraits. For the clothes, it’s more an aesthetic preference.

What I also like in the staging is this confusion between what is real and what is not, the creation of idyllic moments.

Can you tell us about one of your projects for the coming months?

Can you tell us about one of your projects for the coming months? I am thinking of continuing my project started in the Rimouski art residency, For now we cradle in tall grass, until the end of the summer. Next to that, I’m thinking of making portraits of people who live here, in the Bas-Saint-Laurent. There is a documentary and social dimension to my work, not just retrospective or personal.

How do you see your work evolving in the future? In what field would you like to work?

The question of space will probably remain, and the portrait. My personal projects will probably always focus on place and identity, themes that I am still exploring.